Peg Rovi was introduced to Montgomery School by her neighbor, Lynn Vessey, in 2000. She was substitute teaching in Downingtown, and Lynn suggested she contact Montgomery School as they were in need of substitute teachers. It didn’t take long before she was a daily presence as a substitute teacher and part-time school nurse. She was also responsible for the after school care program. In the fall of 2001 she was hired as a part-time (2 sections) 6th grade English teacher and part-time administrative assistant for the Head of Middle School, Sue Matthias. Then the following year, she was hired as a full time 6th/7th grade English teacher after graduating with a teaching degree in 1983. It just goes to show that it’s never too late to get started on a career! Peg had finally become a teacher at the "ripe old age" of 40.

With great sadness, Peg left Montgomery School in the spring of 2004 to move to Williamsburg, Virginia with her family. She taught 6th grade reading at Hampton Roads Academy in Newport News, VA for two years. Then, in August of 2006, she moved back to her hometown of Chicago with her children who are now 24 and 21. Peg is no longer a teacher, but can say with certainty that those were the best years of her life. She loved every minute of it. Now Peg is working in the corporate world putting her skills to work in a different way. She is often asked to edit press releases, corporate communications, and marketing materials and she still gets to work with people who need help with spelling, punctuation, grammar, and sentence structure. They just happen to be a little older than the students at Montgomery.

- What is your first memory of Montgomery School?

My first memory of Montgomery School was the farmhouse. I had never seen a school like that. The schools I had attended were traditional – one building with hallways and lockers. At that time, the barn was still standing. The lockers were in the barn. I was amazed by the outdoor entrances to the middle school classrooms. Bell Hall is probably my favorite place in the school. I witnessed many wonderful chapels given by teachers and students in that room. I suppose the children were supposed to learn something there, but I’m quite sure I learned more than they did.

- What is your favorite memory of Montgomery School?

I was asked to give the graduation speech the last year I was there. I felt like I had graduated with my students. I spoke about being kind. I think of that speech so often as I find that the message is still relevant today. My most vivid memory happened on September 11, 2001. That was the day I learned that being a teacher goes far beyond what is learned in a classroom.

- If you could bring one musician back from the dead who would it be, and why?
Without a doubt, it would be John Lennon. He left this world way too soon. I would have loved to see him grow old. I often wonder what songs he would have written had he had the chance.

- If you could be in a book, TV show or movie, what would it be?

I would like to be in any Harry Potter book. Hogwarts is always looking for a Defense Against the Dark Arts teacher. I’m sure there’s an opening at that school.

- If you could master one skill you don't have right now, what would it be?

I’ve always wanted to play the piano. I actually HAVE a piano. There is really no excuse.

- Which fad do you wish would come back? Which fad should be gone forever?
I think we should bring legwarmers back. I truly see the need for those now. I would like to see social media acronyms disappear – LOL, SMH, ROTFL. Selfies can go away, too.

- What words of wisdom would you pass on to your childhood self?

- If you only had one word to describe yourself, what would it be?
Grateful

Louise Vinueza was hired to be the art teacher at Montgomery School nearly 20 years ago. When she started she was the only art teacher and taught grades PreK through eighth grade. For Louise, the best part of teaching was getting to know the students and figuring out what could be made in the art room. After leaving Montgomery, Louise studied painting at the Pennsylvania Academy of Fine Arts. She graduated after four years with a Certificate in Painting. Louise now spends time painting in her studio, or in her flower garden or in Philadelphia looking at art. She is heading to Cornwall, England this summer to spend time with her husband's family, including SIX grand kids. Louise says, "When I think about my time at Montgomery, I am grateful to have had such a positive job experience, and to have been around such beautiful art!"

- What is your first memory as a teacher at Montgomery?
My first day on the job was picking up a van in the morning, filling it with seventh grade boys whom I had never met, then following another van (ten hours) to New Hampshire for their Adventure Day camping trip. I didn't quit, and it began my profound, joyful experience of teaching middle school aged kids.

- What is your biggest regret?
I never should have made John Michael Sedor be a Spice Girl in the Talent Show!

- What was your first car?
I cannot remember, but I do remember learning to drive stick in my dad's Volkswagen Beetle. Not a happy memory!

- If you could be any animal in the world what would you be, and why?
I would like to be an owl so that I could fly around at night and check out what the world looks like by moonlight. It might also be fun to scare people who are camping.

- If you were 85 years old, what would you tell your son?
I would tell Jonah to laugh more.

Louise's works are part of an art studio tour each fall. She sells paintings from her home studio during the event each November. 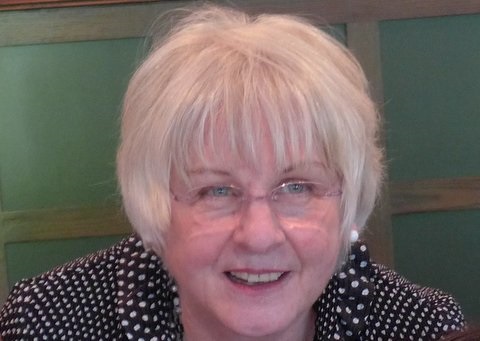 In August 1987, Carole Rex, heard about a "new" private school opening five minutes from her home. Having taught only in a private school in the past, she thought she would investigate job possibilities at Montgomery. It wasn't too long before she found herself crossing a stone covered parking lot each morning to unlock all of the portable classrooms, a.k.a. "The Trailers." Besides being a pseudo-gatekeeper that first year, she was also a teacher’s aide working with the youngest children, some still in diapers. During the next five years, Carole was chosen to be Montgomery's PreK teacher. In the 1990s, that part of the school curriculum was mornings only, so she rounded out the day by being part of the afternoons program. It was during those first six years that she quickly rediscovered her love for teaching and the joy and fulfillment it brought. She spent eighteen more years at Montgomery in the capacities of kindergarten teacher and first grade teacher and especially loved teaching reading and writing. As the years progressed, she increasingly came to enjoy math instruction too, especially when Singapore Math was introduced. In addition to teaching, Carole served for six years on the Board of Trustees.

As Carole remembers it, "I was busy for twenty-four years at Montgomery School! Happily busy. What could be more rewarding than watching children achieve, observing their personalities emerge and confidence grow, and witnessing their love and enthusiasm for school. What could be more rewarding than to get and give hugs, watch students have fun while learning, and even be a little mischievous at times. (That will remain a topic for another time.) My years at Montgomery and my friendships with the children, parents, and staff will always be a highlight of my life."

- What song best describes you?
Pharrell’s “Happy” makes me happy.
- What book are you reading now?
Funny you should ask! I just finished reading my son Marty’s fanciful novella, High Turnover at the Cult of Cults.
- If you were 85 years old, what would you tell your children?
"The choices you make not only affect your life but the lives of those around you as well." Also, "Do the next right thing" and “Try to put love first."

- Which superpower would you like to have?
Not being well versed in the study of superpowers, I hurriedly looked up lists online before answering this question. I decided that “dark energy manipulation” was out, as was “wall crawling.” I have settled on good old flight ability or, better yet, teleportation.

- What did you want to be when you were 10 years old and why?
By that time, I had given up on becoming a cowgirl. I remember remarking to my mother that I just wanted to stay a 10-year-old because it was so much fun and I wouldn’t have a lot of responsibilities. That didn’t work out either. Kami Mulzet has been a member of the Montgomery School community for 15 years. In April 2000, Mrs. Mulzet was hired as the Director of Development. Since then she has transitioned to her current role as middle school classroom teacher and social media, storytelling guru. Mrs. Mulzet has taught language arts, drama and social studies in the middle school, directed the 5th grade play for eight years and coached 8th graders in public speaking as they prepare for their chapel presentations. Mrs. Mulzet holds a B.A. degree in English from Hampshire College in Amherst, Massachusetts, and a Master’s degree in English and American Literature from the University of Iowa. To get to know Mrs. Mulzet a little bit better (and fill you in on some things you may not know about her) we asked her a few interesting questions.

- If your house caught fire and you could only bring two things with you, what would they be?

I’m going to assume that you mean beyond the living things. I would want to save my family and pets first, but beyond that, I would want to save my mother’s engagement ring. My father saved all his soldier’s pay throughout WWII and bought it right after the war. It is one of my most precious possessions because I know what he did to earn the money to pay for it, and it is a symbol of his love for my mom.

My daughter has a stuffed animal that meant the world to her when she was little. I’d also want to grab “Rob,” her black lab puppet.

- What is your favorite restaurant?

Seasons 52! It’s a chain and there’s one near the King of Prussia mall. They serve healthy food and it is all low calorie, so I don’t have to feel guilty at all.

- What is your secret talent?

- Would you bungee jump?

I love the idea and I think that I would have before I became a mom. I always wanted to skydive, but I lost that desire when I had a child. After having Cali, I just couldn’t justify taking a risk like that. I wrote a poem about a friend’s daughter who bungee jumped off of a bridge in Africa (Victoria Falls) the week before another women’s rope BROKE over the same river (it had crocodiles in it!) While she survived, I still can’t imagine that!

- What book are you reading now?

I always have a few, but one is a dystopian novel called Independent Study by Joelle Charbonneau. It’s the second of the trilogy. I like the series. It’s being compared to The Hunger Games, but it isn’t nearly as good. Another book that I’m reading is The Know it All by A. J. Jacobs. He is reading the entire encyclopedia and writing about it. I’ve read other books that he’s written, and I love his humor.